Back to all posts

Dixie Chicks and the lack of role models. 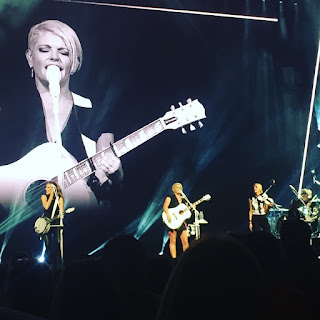 I got a babysitter last night and went to the Dixie Chicks concert, just like every woman over 35 in this city. And it was SO MUCH FUN! And I am SO TIRED. But my sitter did a magical job of getting both boys to sleep, and I got to hear live music. It was kind of crazy loud, but I had great seats and, wow, do their voices still sound amazing and tight and powerful.

It got me thinking how frustrating it was as a young musician with two X chromosomes to have so few role models. There are plenty of women singers out there, but I grew up watching frontwomen backed by male band members -- even the few famous women artists who were good at playing their own instrument had bands full of men (and even my band is all men! though I can take a solo too... it's hard to take one when you could make Steve Cooley pick one instead).

To get even more specific, there were (and still are) so few women who play more than just average strums on an a guitar. Now, I'm not at all knocking acoustic guitars. I strum one in my own band about half the time. But being able to play leads or even just play above average is surprisingly uncommon in the music industry for women.

(Let's not get caught up in saying things like, but what about Joni Mitchell? Tori Amos? etc etc... Exceptions are not the rule.)

So watching the Dixie Chicks belt out tight harmonies AND play multiple instruments well was just brilliant (as in... Emily actually picks the banjo, not just strums it like a guitar. I mean strumming it like a guitar sounds cool in lots of songs and bands, but any guitar player can memorize a few banjo chords and jump up and down. To pick it properly and in tempo and fast is a challenge!).

I have a lot of young (female) guitar and piano students. I teach them all how to read music and understand chord theory. I've got 8-year-olds who can transpose chord progressions. Like any woman in business, I often explain to them how to be taken seriously by their male co-workers/band members, you need to know your stuff in and out. (How many times has a male band member or sound engineer explained to me how me how my keyboard should be set up? Ugh.) I just wish there were more role models out there for my wee students -- that I could say, "Here are a hundred amazing examples of bluegrass guitar solos, each by a different important female picker."

Anyway, thanks, Dixie Chicks for being not just amazing entertainers, but for being amazing musicians.