Back to all posts

Yoga shorts for the win. 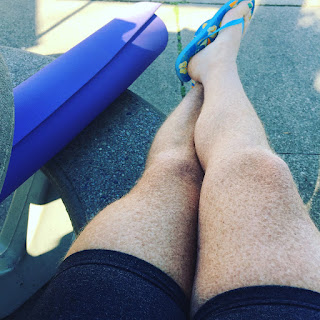 I was absent from yoga for much of May, and my mental health has suffered for it. It wasn't for lack of effort on my part -- it was for lack of childcare. My nanny-type-person (she's not an actual nanny, but we have a good barter thing going on) was gone for a month, and it just is not in the budget to go to a yoga class AND pay a babysitter.

Anyway, my childcare is back, and I went to yoga this morning! And get this -- I went to yoga in YOGA SHORTS, which are now my new favorite thing in the world. It's basically like doing yoga in your underwear, and that's awesome and freeing and sweaty and feels good. I'm over the yoga pants, y'all.

Also, I didn't realize that it was an internet-viral-worthy thing to reveal that you haven't shaved your legs in years, like that fitness blogger who made headlines a few weeks ago. Like, is that how I should have been marketing myself??? Typical me -- timing just always SLIGHTLY off. Can someone out there help me craft a blog or press release that'll go viral that says "musician uses album cover image where she's not wearing any makeup" ?? You know, it'll say have a clickbait article that's, like, "This indie musician is raising eyebrows with her scandalous album cover image" and then the whole thing is SHE'S NOT WEARING MAKEUP OMG OMG OMG HOW CRAZY IS THAT? Any publicists out there want to take that and run with it? I'll even delete this blog if you think it's ruining the effect.

Anyhoo ... check back for an announcement about how to pre-order my new album! It's a fun one.
Wanna buy a Brigid Kaelin CD? http://brigidkaelin.bandcamp.com for free downloads and more:)